Staff member
When Depeche Mode announced their Delta Machine tour on October 23rd 2012, it was stated that they were to perform at the Zagreb Hippodrome (capacity: unknown).
Three days later , Depeche Mode stated to be performing at Stadion Maksimir (capacity: 35,423) instead. But later , the show was moved to Zagreb Arena (capacity: 16,500). According to Billboard , the attendance was 15.969 people and the gross sale was $959,845.
Diamond Version was the support act. 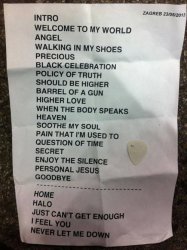