Final part of a series allowing each band member to speak for themselves on whatever takes their fancy. Sadly, the editor tries to give Alan's words a controversial edge that isn't there, as Alan is mainly talking about his pre-Depeche years, and time recording at Hansa. Taken for what it is this turns up some very interesting facts - did you know he lived in Bristol for two years?
" My god, this is raking up some history. "
Click to expand... 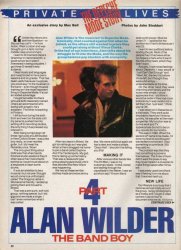 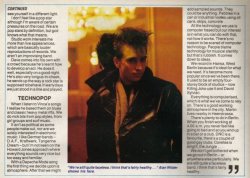 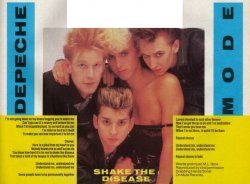 Alan Wilder is ‘the musician’ in Depeche Mode. Ironically, that counted against him when they joined, as the others still wanted to prove they could get along without Vince Clarke. In the last of our interviews, Alan talks about his struggle to fit into the Mode, and the way the group balance stardom with anonymity. [1]

Unlike the others who are from Basildon – or Bas as they call it – I’m from Acton, West London and was brought up in a fairly normal middle class environment.

I went to St Clement Dane’s Grammar in Hammersmith, a good school but I wasn’t interested in being a student. I got three O-levels in arty subjects.

I liked music and languages and I was forced to have piano lessons and do grades. That has been useful because I suppose you could say I’m the musician in the band – even though musical training isn’t the most important thing to Depeche Mode. It’s just an added advantage.

I’ve got two elder brothers who are both classically trained. One is an accompanist who works with singers; he’s excellent. The other is teaching in Finland.

I left school during the sixth form and went on the dole until my parents pushed me into writing off to recording studios, the only thing I’d expressed an interest in.

After being turned down 40 times I got a job at DJM Studios in New Oxford Street. I was a tea boy, really, an over-worked gofer, but I did meet the Rubettes once. Wow!

The only good thing about DJM was that when bands finished studio sessions they’d often leave their instruments behind so I could muck about on a keyboard or bash some drums.

It was an ambition to be a musician but not one I thought would come true until a band called The Dragons came in. We became friendly, I ended up joining them and moved to Bristol.

That was a pre-punk, soft rock group, nothing special, but I did gigs and we made a single. I can’t even remember what it was called. [2]

After two years in Bristol, life got too lethargic so I was glad when a friend dragged me home to join a band called Daphne And The Tenderspots. My god, this is raking up some history. That was a restaurant type group playing jazz blues until it was decided that New Wave was happening.

We had all these terrible clothes made and worse skinny ties. We were awful but again we had a deal and made a single, ‘Disco Hell’. I shouldn’t be telling you this!

After various other bands like The Hitmen, I was in my customary state – broke, bored and leafing through the classifieds in the Maker. [3] I saw an ad which said “Known Band seek synth player. Must be under 21.” I applied for the audition but I had to lie because I was 22.

I went to two auditions before landing the job. Most of the people they’d had were either no-hopers or fans who’d learnt the hits off by heart, which they didn’t want.

Actually, I had mixed feelings about Depeche. I was aware of ‘Just Can’t Get Enough’ and ‘New Life’, the two hits before Vince left, but I thought they were a bit wimpy – understandable at the time.

On the other hand they were charming and friendly and the music was simple. I could appreciate that. I did think it would be better if they had more bollocks but I was careful not to tell them that. I just said, “I think you’re OK”.

I was taken on in Depeche on a trial basis. They were quite shocked to have lost Vince so quickly, he was after all the main songwriter. My function was to do live work and TV appearances but not to be on any records for six months.

This was in 1982. When the second LP came to be made, I’d done my final bit and thought I warranted involvement. I had something to contribute. Still they said no.

The problem was that they had something to prove to themselves. The three of them didn’t want the press to say they’d just roped in a musician to make things easier after Vince left.

Our lifestyle is so busy that it revolves almost totally around the group. I enjoy photography as a hobby and I’ve got a video camera I use on tour to document what we do. It’s fun to see yourself in a different light. [4]

I don’t feel like a pop star although I’m aware of certain pressures on the road. We are pop stars by definition, but god knows what that means.

Studio work interests me more than live appearances, which are basically louder reproductions of records. We aren’t an improvising band.

Dave comes into his own with a crowd because he’s learnt how to develop an act. He does it well, especially on a good night. He’s also very tongue-in-cheek, he sends up the way a rock star is supposed to behave. In the early days we just stood in a line and played.

When I listen to Vince’s songs I realise he based them on blues and classic heavy metal riffs. We do nick bits from pop styles, from girl groups and surf music.

It isn’t as political as some people make out, nor are we solely interested in electronic music. I like German bands – D.A.F., Kraftwerk, Tangerine Dream – but I’m not keen on the Howard Jones approach where everything sounds very nice but too easy and familiar.

With a Depeche Mode song the first thing we decide upon is atmosphere. After that we might add sampled sounds. They could be anything. Pebbles in a can or industrial noises using oil cans, skips, concrete…

All the technology we use is computer based but our interest is in what you can do with that, not how it works. There’s no reason to be scared of computer technology. People blame technology for musical sterility but that’s rubbish. It comes down to ideas.

We record in Hansa, West Berlin because it’s ideal for what we need. It’s become more popular since we’ve been there. It used to be an empty four-storey block of studios – now Killing Joke use it and David Sylvian.

Everything is computerised, which is what we’ve come to rely on. There’s a good working atmosphere in the city. Martin lives nearby in Heerstrasse.

There’s plenty to do in Berlin. When you finish working at 4.00 a.m. you never feel like going to bed and so you end up in a bar or a club. DNC is a favourite, there’s a couple of good gay clubs, Corelles is alright, the Jungle…

We don’t get bothered when we go out in Berlin – or anywhere else particularly. We are still quite a faceless band. I think that’s fairly healthy.

[1] - This is what I was referring to in the summary. As for 'struggling' to fit in, there is one paragraph where Alan states the others held back from taking him on as they wanted to prove they weren't helpless without Vince - something the other three have consistently acknowledged. It's hardly the battle of wills implied in the opening. In fact, Alan seems quite out of character in several places in this interview, coming across as a bit of a victim. Going by other interviews of his this is something he just doesn't tend to do, so I can't help but think his original words have been clumsily or irresponsibly edited. While heavy editing is always going to happen with pieces like this, it's usually - the other interviews in this series included - done less obtrusively.
[2] - Thanks to the excellent Recoil website
You must be registered for see links
I can tell you it was called Misbehavin'.
[3] - Alan has cut to the chase a bit here: at some point circa 1980 Alan was a session musician for The Korgis, and was a member of another band in 1980-1981, Real To Real.
[4] - Funnily enough, I've got a video of ancient DM clips taken from various TV programmes, including one early home video of Martin singing with a banjo. Now, I just wonder...
Click to expand...