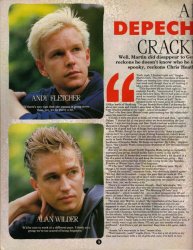 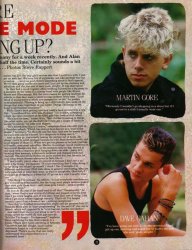 Brief interview with the band in a humourous mood, taking a sideways look at their eccentricities and foibles, and the 'love' thing. Oh and, inevitably, Martin's much-hyped cross-dressing. Very engaging, and an antidote to later 'serious' articles.
“ "Occasionally,” he says, “when I buy a new article of clothing and present it for the first time I get a few laughs, sort of ‘you can’t wear that’ sort of thing. Like when I got some rubber leggings recently. That’s all I’ve bought recently apart from a dress or two – nothing exceptional." "
Click to expand...

Well, Martin did disappear to Germany for a week recently. And Alan reckons he doesn’t know who he is half the time. Certainly sounds a bit spooky, reckons Chris Heath… Photos Steve Rapport.

“Yeah, yeah, I freaked right out,” laughs Martin Gore. The other members of Depeche Mode are teasing him about disappearing last week and, though they’re all treating it like a joke, it’s obviously quite serious.

“This business did my head right in,” he explains frankly, “aannnnnnnd I had to go away for a few days. We’ve had quite a lot of work on recently, there’s a lot of stress and I’ve been moving house as well.” So he escaped alone to a rural area of Germany 150km north of Hamburg. “I’ve got friends there that I’ve known for about ten years and I hadn’t seen most of them for seven years so there were reunion parties every night – lots of schnapps!”

That’s the first time Martin’s ever gone missing but the others don’t seem the least bit surprised.

“I think it does you good to freak out every now and then,” says Dave Gahan. “I almost did at one point when we were recording the last album. I was moving house and then I had a bad car accident and at that point I thought ‘that’s it, it’s over’. I eventually came through it with a lot of grief and lots of drugs from the doctor.”

Alan Wilder, though he says he’s never actually “done a runner”, claims he’s “in a permanent state of being freaked out, I don’t know who I am a lot of the time”. In fact the only one who’s never gone a bit nutty is Andy Fletcher who Dave describes as “sort of like the backbone of Depeche Mode. He keeps us together. He’s like,” sniggers Dave, “the Charlie Watts (anonymous drummer of the Rolling Stones) of the band.”

But why all this stress? Surely Depeche Mode, being an incredibly successful pop group, should hardly have a worry in the world? Apparently not. It seems that every time they have a hit they’re in a bit of a panic to follow it up and keep the momentum going – they almost seem convinced that if they take a long break like Spandau, Frankie or Wham! have, they’ll be forgotten.

“It’d be nice,” reflects Alan, “to work at a different pace. We do things a bit more rushed than we would otherwise.”

“Speak for yourself,” murmurs Andy, who obviously doesn’t agree. “It’s not that we’re scared – I enjoy the pace we work at. The reason I don’t take a year off is that I don’t want to take a year off.” But he does admit that “If there’s any sign that our success is going down then, yes, we do worry a bit.”

There’s no need at the moment though – their new single, “It’s Called A Heart,” has just shot into the charts for their thirteenth consecutive hit (of all which, bar “The Meaning Of Love” and “Somebody” – which wouldn’t fit – are on their greatest hits LP out soon). As usual Martin wrote it. “Obviously we feel fairly dependent on him – I think about that a lot,” admits Dave.

The song, says Martin, is about “the importance of the heart in a mythical sense, as the part of the body where good and evil are supposed to start. I’m not sure whether I believe in it but it’s a nice idea.” And, whatever he thinks of that, Martin admits he’s definitely in love with Christina, his German girlfriend for the last two years. As for the others, Alan has been going out with his girlfriend for five years but thinks “falling in love is a bit of a funny idea”. Andy says “there’s no-one I really hate in the world, but as for my views on love, I don’t really want to go into them. I’ll only get into trouble with my girlfriend.” And Dave’s just got married. Kept that bit quiet, didn’t he?

“Well, basically, yeah!” laughs Dave. I’ve met a lot of girls in my time and have been with a lot of girls and, sure, I’ve been in love before, but Jo’s the only girl I’ve ever met that I could live with. I just get on with her. We have lots of arguments just like anybody else but somehow… we cross over, there’s something about it that’s special. We’ve been going out for six years and I just got up one morning and asked her and she just sort of said ‘yeah, alright’. It was that casual.”

So they had a quick registry office wedding followed by a big party in a marquee on the lawn of a country hotel with people like Alison Moyet and Blancmange. But the main reason for getting married, he admits, is that they want to start having children fairly soon. “I just think it would throw a whole new perspective on life,” he gushes enthusiastically. “Having to bring up a child totally puts aside all the things that were important to you before. Things like being in the band would become secondary.”

While Dave’s been getting married, Andy’s been moving into a new flat – “a cardboard box with lots of plants” – in London, something which the other members of the band give him loads of stick about.

“He’s lost his roots,” teases Alan. “He’s started investing in things like wine racks, you get the drift? He’s even got a couple of books on caring for plants,” he adds with disgust.

“He’s moved from Baz to London,” complains Dave who still lives in a Basildon suburb. “Fletch has always been known as a ‘man of the people’,” he titters, “by the kids and the fans. And now he knows that he’s lost that and he’s scared. He’s desperate to hang onto it.”

And on they go, continually taking the mickey out of Andy. He doesn’t seem to mind, perhaps because he’s the most down-to-earth and level-headed of them all. When he’s got his glasses on he looks just like a friendly, over-sized schoolboy. Martin, in contrast, would stand out in any crowd. Besides his hair – at the moment curly on top, shaved at the back with a long thin plait hanging down one side – today he’s wearing blue mascara, a diamante necklace and chipped black nail varnish. The rest of his clothes are quite modest but, yes, he says, he still often wears dresses whenever he feels like it.

”I don’t really like it when it’s played on because I don’t see it as such a big thing,” he explains. “It’s just something that I enjoy doing. I never bring the subject up myself. I think I like it because it is different and because I find male dress in general very boring. Men are very restricted in what they wear, in what is acceptable. Obviously I wouldn’t go shopping in a dress but if I go out to a club I usually wear one.

“One thing I’ve noticed,” he reflects, “is that everybody considers you gay if you dress effeminately, but the thing most people seem to miss is that most girls these days – well, most girls I know – seem to prefer effeminate boys.”

So how do the rest of the band react to all this? “Occasionally,” he says, “when I buy a new article of clothing and present it for the first time I get a few laughs, sort of ‘you can’t wear that’ sort of thing. Like when I got some rubber leggings recently. That’s all I’ve bought recently apart from a dress or two – nothing exceptional.”

Once they’ve finished promoting this single and the greatest hits LP, Depeche Mode plan to “start programming” for the next LP, due out in march, which will apparently be “a lot heavier, harder and darker”.

And until then they’re just going to carry on living the rather weird life that pop stars do. “It’s like ‘I’m happy – I’m depressed’,” explains Dave, switching his face from a smile to a frown. “There isn’t really anything in between. You never just feel alright, you’re either extremely happy or you’re extremely depressed. There’s no-one that can really understand unless they’re in a successful band.”
You must log in or register to reply here.
Share:
Vkontakte Odnoklassniki Mail.ru Blogger Linkedin Liveinternet Livejournal Buffer Diaspora Evernote Digg Getpocket Facebook Reddit Pinterest Tumblr WhatsApp Telegram Viber Skype Line Gmail yahoomail Email Link
Top