First in a four-part series where each member of Depeche Mode talks individually about themselves, their lives, their career with Depeche Mode, and so on. Dave begins the series, and the article is composed solely of his quotes, discussing his tearaway years in Basildon and role within Depeche Mode.
" I loved the excitement of nicking a motor, screeching off and being chased by the police. Hiding behind a wall with your heart beating gives you a real kick – will they get you? "
Click to expand... 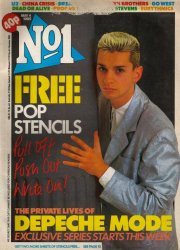 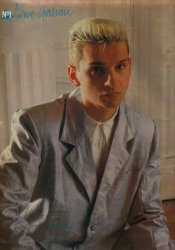 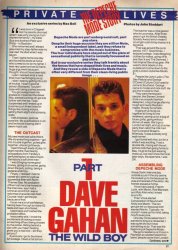 Despite their huge success they are still on Mute, a small independent label, and they refuse to compromise with the music business.

The four individuals have stayed out of the glare of sensational publicity that is normally focussed on pop stars.

But in our exclusive series they talk frankly about the forces that have shaped their lives and music. And they reveal a different side of Depeche Mode that is often very different from their clean-living public image…

I was born in Chigwell but my parents divorced when I was very young so mum moved the family – my sister Sue and brothers Peter and Philip – to Basildon.

She remarried and I always assumed my step-father was my real dad. He died when I was seven.

Then I came home one day and found this bloke at home who turned out to be my father. I was very upset and we all had a huge argument because I thought I should have been told.

Later I realised what a hard time mum had bringing us up.

I didn’t help by getting into a lot of trouble. I wasn’t good at school (Barstaple). I couldn’t cope with being pushed around.

You got categorised into grades so I resented the clever kids, started bunking off, got into bother with the law. I was suspended and ended up in juvenile court three times for things like nicking motors, setting them alight and spraying walls.

I left at sixteen, soon as possible. My qualifications in art and technical drawing didn’t seem much use.

My best mate was called Mark. We did everything together – got into trouble together, pulled girls together, shared girlfriends.

I went through loads of jobs. In eight months I had twenty occupations from Yardley’s perfume factory to labouring to Sainsbury’s soft drink man.

I was bringing home good money, giving mum some, going down the pub, pulling, being a general wide boy.

Finally, I realised I had no career so I went for a job as apprentice fitter with North Thames Gas. My probation officer told me to be honest at the interview, say I had a criminal record but I was a reformed character blah blah. Course I didn’t get the job because of that.

It cost me a lot of confidence, having been through so many IQ tests and been shortlisted.

I went back and trashed the probation office.

I was pretty wild. I loved the excitement of nicking a motor, screeching off and being chased by the police. Hiding behind a wall with your heart beating gives you a real kick – will they get you?

Eventually I got to Southend Art College. I liked art school. The teacher was a nice geezer who let us smoke. After three years I got the British Display Society Award which meant I could get a job doing display in a big store.

That was around the punk period, 1977. [1] Good times. I enjoyed college, I was designing clothes for mates, going off to see Gen X and The Damned. I had original Sex shop gear. We used to stick labels on the outside and come down to the gritty London clubs like Studio 21.

People like John Lydon (The Sex Pistols) and George O’Dowd (Culture Club) used to come to Southend. George came to model and nick stuff. He got into trouble for that.

They were flamboyant people, like Steven Linnard (now a successful fashion designer), a big change after my rough and ready Basildon mates. Rowdy but artistic.

A gang of us hung out together all living for the weekend, saving up for a bag of blues (pills), going without dinner all week. We’d go to London all night, end up at some party then catch the milk train from Liverpool Street to Billericay. It was a bloody long walk home!

I got bored with that, but for a while it was exciting. I had a double life, mixing with the art school mob then going home to Bas. I’d go to the pub wearing makeup, but cos I knew the local beer boys, the spanners, I was OK.

Vince Clarke I met one day outside a pub in the city centre. He looked up to me because he was a bit scared of the skins. His friends stayed at home.

Vince had a band, French Look with Martin, Rob Marlowe, and Rob Allen who I mixed sound for.

Then Vince started Composition Of Sound with Andy and Martin. The two groups fell out because both wanted Martin. Typically, he couldn’t make up his mind, being nice to everyone.

One day Vince asked me if I wanted to sing at a rehearsal. I was quite shy but it was something to do. That was the beginning of Depeche Mode.

We got a residency at Crocs in Rayleigh as resident electronic band, people came from London to see us (Culture Club also built up an early Crocs following). Rusty Egan (club socialite then Visage drummer) was one. He introduced us to Stevo (Some Bizzare mentor) who was just a general nutter on the scene.

The group met Daniel Miller (of Mute Records) shortly after our first Venue gig (New Romantic package night). He put out our first single just after the Some Bizzare track. Lots of companies were waving cheque books and promising the earth but only Daniel was honest. He offered us points (a share in the profits). We split everything fifty / fifty.

Even now we have no management deal and no contract. We pay our own salaries and don’t have aggressive marketing.

Keeping control is important to us and Mute. We’ve kept out grass roots following. The fans are so hard core that singles tend to chart quickly without hyping so we spend our money on decent stage shows and recording.

I’m not interested in image making. Depeche Mode has never had idealised group pictures on records. We prefer visuals and imagery. Four blokes standing against a wall wearing nice suits doesn’t excite me. A look dates.

We’ve matured at our own pace. When we did “Speak And Spell” we were very young and naive. We got slagged of for being teeny bopper because we didn’t care what was hip.

Even we knew we didn’t have much to say, and the fans still stood by us. We owe them a lot because they never were influenced by the knockers, or by Vince leaving.

As for the group, our working class background keeps us fairly level headed despite the stupid amounts of money to be made.

For now the group is still growing up so I’m very happy about the future. Depeche Mode is a group which has good ideas rather than being a great bunch of musicians first. We learn all the time.

I’ve got other ambitions, like writing songs. I have tried – but Martin is so good at that it would be silly to offer the group something second rate.

We’ve practically lived together for five years, so you know immediately when someone doesn’t like what you’re doing.

I’ll concentrate on the singing. I think I’m pretty good at that.

[1] - Dave must have got a bit confused here - he would have left school in summer 1978 at 16, and was "requested to leave" art college in mid 1981 due to the amount of time he was spending out of college with Depeche Mode. So art school could only have been in these three years.
Click to expand...