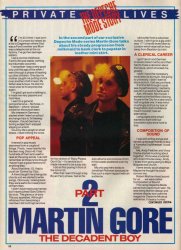 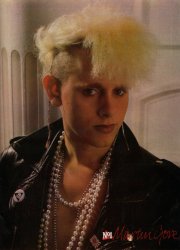 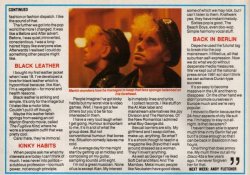 A Martin Gore monologue, composed of short quotes and soundbites, threaded together into a sort of potted life story. This gives a series of glimpses rather than a coherent story, and Martin's mischievous humour regularly peeps through. If you don't go into this expecting too much, you'll have a thoroughly pleasant time.
" People imagine I’ve got kinky habits but my worst vice is video games. Well, I have got a few others but you’d be far too interested in them. "
“I’m 23 I think. I was born in London but raised as a kid in Dagenham where Dad was a Ford’s worker and Mum was a telephonist at the car factory. I’ve got two teenage sisters.
Click to expand...

I led a normal childhood. Family life was stable, nothing too traumatic occurred.

I remember I was a very good boy until the age of five when I went through a phase of beating up other children. One day my mother caught me putting a brick over another child’s head. My father was furious. He told me never to hit anyone else again.

I’m glad I got such a talking to, it made me very passive and harmless.

I went to a general comprehensive – Nicholas, in Basildon – where I played cricket for the school team.

My interest in Germany started when I went on school exchange trips to Schleswig-Holstein. I found German a boring subject but I enjoyed staying on a farm.

Country life is alright in small doses. I liked milking the cows.

Interest in pop music stemmed from a couple of things. Firstly, I was heavily into the teen mag Disco 45. I had hundreds of them and used to read all the song words. I can still remember all those lyrics though I haven’t got a good memory for anything else.

A friend taught me a few guitar chords and we started to write songs. Obviously, looking back they were awful but I was proud of them then.

I didn’t have many pop heroes but I nearly joined Gary Glitter’s fan club. The glamour of early 70s pop appealed. Although I refrained from becoming a member I did hunt high and low for his version of “Baby Please Don’t Go” – it’s terrible but it made me want to be a pop star.

I did all that posing in front of the mirror bit.

After that I went through a big Bryan Ferry phase, had all his solo albums and pictures of him in his tuxedo plastered over my wall.

My only pop hero today is Jonathan Richman because he has such a warm rapport with an audience.

I did suffer from a suburban outlook. I didn’t go to a gig until I was 17! I’d hardly even been to London which was half an hour away from Basildon by train.

I got French and German A-Levels (failed maths) and then had to make a decision about the future, which shocked me greatly.

I didn’t have the necessary motivation to do much, like going to university. I didn’t want to leave school, I felt secure there.

If all this fell through I could see myself studying, I certainly wouldn’t go back to bank work.

Aah, the bank. My first job. I worked at the NatWest clearing house in the City for a year and a half on grade one. It was mind-crushingly dull but my lack of imagination and confidence meant I couldn’t see an alternative.

Languages were what I wanted to work with but translation jobs were hard to find.

I was still writing songs and saved up enough money to buy a Yamaha 5 synthesiser. It cost £200.

Me, Andy Fletcher and Vince Clarke started mucking about together. Vince was a local kid who lived minutes away, Andy I knew from going along to Boys Brigade and church.

I went strictly as an observer. Maybe he thought he could convert me.

Robert Marlow mixed sound for us… we were called Composition of Sound.

The name Depeche Mode came from Dave much later. He was doing fashion design and window display and used the magazine Depeche Mode as a reference. It means hurried fashion or fashion dispatch. I like the sound of that.

The further we got into the pop world the more I changed. It was like a Before and After advert. Before, I was quiet, introverted, conscientious. I was a long-haired hippy like everyone else. Afterwards I realised I could do something other people might like.

I bought my first leather jacket when I was 18. I’ve developed a love for black leather which is hypocritical because, like Alan, I’m a vegetarian – for moral and health reasons.

Black leather is striking and simple. It’s only for the image but I’d also like a motor bike. Couldn’t pull it off though.

Maybe this leather fetish springs from seeing an old Marlon Brando movie, called The Fugitive Kind, where he wore a snakeskin outfit that was pretty cool.

When people ask me what my interests are today I can’t think of much. I was never into politics – a dubious profession – too much power, not enough principle.

People imagine I’ve got kinky habits but my worst vice is video games. Well, I have got a few others but you’d be far too interested in them.

I have a very loud laugh when I get going. Humour is important to me, it’s in a lot of what the group does. But not conventional humour: that bores me. Situation comedy leaves me cold.

An average day for me might start by getting up at midday and composing on my guitar, sampling sounds until eight.

I’m not a great musician. None of us is except Alan. My interest is in melody lines and lyrics.

I collect records. I like stuff on the Atatak label and mainstream alternatives like Joy Division and The Ramones. Of the New Romantics I admired what Boy George did.

Sexual barriers are silly. My girlfriend and I swap clothes, make-up, anything. So what? It’s a shock though to read in a magazine like Bravo that I walk around dressed as a woman. They’ll invent anything.

As well as George I’ve liked Soft Cell and Marc And The Mambas. Metal music people like Neubaten have good ideas, some of which we may nick, but I can’t listen to them. Kraftwerk yes, they have instant melody.

Depeche used the futurist tag to break into the pop mainstream. It fitted us, all that suburban self-expression. Now we do what we do without desperate media measures. We’ve kept out of the national press since 1981 so I don’t think we can achieve Duran-type success.

It’s so easy to become massive in the UK and then to disappear. On the other hand we didn’t promote ourselves in Europe much and we’re very popular.

I moved to Berlin because the 24-hour aspects of city life suit me. I’m happy to stay out all night. Is that decadent?

I haven’t been able to spend much time in my Berlin flat yet but it’s close enough so that I can be back in Basildon in two hours.

One thing that does annoy me. My mum threw out all my Disco 45s a few years ago. I’ve never forgiven her for that.”
You must log in or register to reply here.
Share:
Vkontakte Odnoklassniki Mail.ru Blogger Linkedin Liveinternet Livejournal Buffer Diaspora Evernote Digg Getpocket Facebook Reddit Pinterest Tumblr WhatsApp Telegram Viber Skype Line Gmail yahoomail Email Link
Top