Martin Gore - All By Themselves | dmremix.pro
Menu
Log in
Register
You are using an out of date browser. It may not display this or other websites correctly.
You should upgrade or use an alternative browser.

Martin Gore All By Themselves

Administrator
All By Themselves 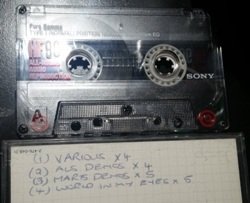 All By Themselves is a demo track written by Martin Gore. It appears as part of Martin's demo tape for the 1983 "Construction Time Again" album

Songwriter: Martin L. Gore
Publishing Information: No publishing information available.
* - Thanks to Ronny for transcribing the lyrics. Please note that this is our best effort; the song's vocals are very difficult to make out, so accuracy is not guaranteed.
Last edited: Aug 7, 2020
D

Administrator
All By Themselves is a demo track written by Martin Gore. It appears as part of Martin's 5-track demo tape for the 1983 "Construction Time Again" album as the final track on the tape; the other four demos are available to listen to on this page. This track may have been intended as a B-side for a single release of And Then... which never materialized.[1]
Alan Wilder stated on Shunt Q&A that he does not remember this song, but perhaps his memory of this song has simply faded with time.[2]

All By Themselves (Demo). This demo is a very gloomy, depressing sounding song with subdued vocals which are difficult to comprehend.


1. Alan Wilder believes that And Then... was at one point considered to be released as a single; see Shunt Q&A: Construction Time Again.
2. Source: Shunt Q&A: ADDITIONAL TRACKS - remixes / B-sides / demos, second page ; about one-third of the way down the page