According to the handwritten info sheet to the right, the "Perversion" demo tape reportedly contains the following tracks:
Mother Me
Enjoy The Silence
Waiting For The Night To Fall [sic]
World In My Eyes
Halo
Happiest Girl
Sea Of Sin
Blue Dress
Personal Jesus
Memphisto
Sibeling
The demos of Enjoy The Silence, Memphisto, Sibeling, and Interlude No. 3 from "Perversion" circulate and are available to listen to in their entirety below. The studio outtake of Halo found below this section is confirmed to be different than the version on the demo tape, but that is obvious because Dave is singing vocals on the outtake. The demo version has only Martin's vocals throughout.
Of 'Mother Me', Daryl Bamonte said: "I remember a track called 'Mother Me, Smother Me' that I believe was recorded for Violator, but didn't make the final cut for some reason. It was a really good song, but I don't think it was even used for a b-side."

An anonymous ex-label employee has the following track listing on his CD and DAT copies of the demo tape; the same tracks that are written on the info sheet are represented, only in a different running order, with the possible exception of Interlude No. 3 as it is not specifically mentioned on the info sheet.
1. Enjoy The Silence
2. World In My Eyes
3. Personal Jesus
4. Halo
5. Mother Me
6. Happiest Girl
7. Sea Of Sin
8. Waiting For The Night To Fall [sic]
9. Blue Dress
10. Memphisto
11. Sibeling
12. Interlude No. 3 (begins after the end of Sibeling) 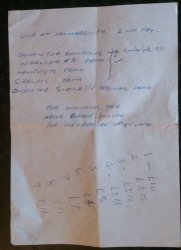 Several of the songs have different lyrics compared to the album versions.
The demos below are in circulation because they were apparently sold separately from the rest of the "Perversion" demo tape; see the hand-written info sheet to the right. While I borrowed the cassette containing Down In The Boondocks, the tape did not have any of the four tracks below written to be on that tape, and was labeled as only containing Down In The Boondocks. Perhaps my contact received the four tracks below on a different tape, or simply did not opt to purchase those tracks at the time.