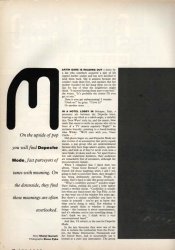 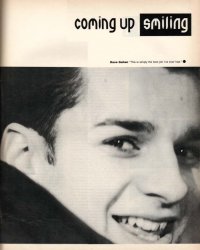 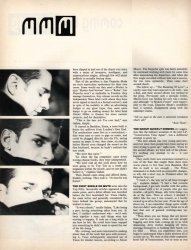 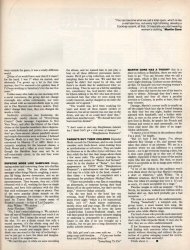 An outstanding and independently-minded article catching Depeche Mode on the knife-edge of being taken seriously. The author discusses the difficulties they have faced due to popular misconception and all but cries out for them to be given at least a second glance. I had to check the date on the magazine because both the writing and the photography seem to have come from four or five years later: this will restore your faith in the music press.
" When I remarked that I liked their last album, "Some Great Reward", many of my friends fell about laughing; when I said I was going to Italy to interview them, they thought I was being deliberately perverse. People, it seems, find it hard to take this group seriously. "
Click to expand...

Martin Gore is reading out a letter by a fan who somehow acquired a pair of his zipped leather undies and has now decided to send them back. She is anxious because she couldn't wash them first, and explains that her mother wouldn't let her hang them out on the line for fear of what the neighbours might think. "I enjoyed having them next to my bed," she writes. "It's probably the closest I'll ever get to you."

Does it ever get embarrassing? I wonder.

In a hotel lobby in Bologna, Italy, a presenter sits between the Depeche boys, wearing a cap tilted at a rakish angle, a suitably thin 'New Wave' style tie, and the manic, false smile that seems to settle on anyone who sits in front of a TV camera regularly. "Right!" he exclaims breezily, pointing to a bored-looking Alan Wilder. "We'll start with you, Vince Clarke..."

Old ghosts linger on, and Depeche Mode are also victims of an assumption that pretty equals vacant, a pop group who are underestimated because they have huge adam's apples, spotless skin, and look as if they've never seen a razor blade, let alone used one. Yet apart from a few odd underwear fetishists, their audiences are remarkably free of screamers, although the preconceptions remain.

When I remarked that I liked their last album, "Some Great Reward", many of my friends fell about laughing; when I said I was going to Italy to interview them, they thought I was being deliberately perverse. People, it seems, find it hard to take this group seriously.

"What's credibility anyway?" ponders singer Dave Gahan, pulling his scarf a little tighter round a swollen throat. "Credibility is usually lost when any band enters the Top Fifty, so for us that went out of the window five years ago. But there's a certain credibility you have to retain in yourself - you've got to know that what you're doing is valid. Not whether it makes people think or whether it changes things - this business is about entertainment, and it's whether you're just travelling along. I don't think we are, I think we're a very unconventional band."

And that, I'd submit, is the case for Depeche Mode.

In the late Seventies they were one of the first to reclaim the synthesizer from the Futurists, the Manic Depressives, Numanoids and Art School Boys, and to successfully use it instead as a pure pop instrument. The group have slipped in and out of the charts ever since with a series of inventive, intelligent, and unpretentious singles, although few will admit publicly to actually buying them.

Part of the problem is that Depeche Mode are such inarticulate spokesmen for their own cause. Some would say they need a Morley to turn "Master And Servant" into a "Relax", but Depeche aren't as malleable as Frankie: they manage themselves, they release records on the independent Mute label (with whom they have never signed so much as a formal contract), and in spite of his inability to offer an advertising budget or any great hype, they seem quite happy to go on making money for label head Daniel Miller to finance his more esoteric projects, and for themselves.

"This is the best job I've ever had," says Gahan, simply.

"It started in Basildon, Essex, a town built to house the spillover from London's East End. The synthesizers came first as a convenience - they were easy to carry to gigs on trains, and could be plugged directly into the PA, saving money on amps. It was, they claim, six months before Martin even changed the sound on his first keyboard, because he hadn't realised that you could.

"We were that naïve."

Yet when the big companies came down waving cheque books, they were unimpressed.

"We were told all this stuff about how we were going to be Top Ten in a week and megastars within the month, and we just didn't believe it," explains Gahan.

Then, Daniel came along and offered them, frankly, nothing. They took it. "At least he was honest."

The first single on Mute went into the Top Fifty [1], favourable articles appeared in the music press and a debut album was recorded before the first bombshell hit: Vince Clarke, the main writer and generally considered the brain behind the group, announced that he wished to leave.

"It was a shock," recalls Gahan, "Like losing a part, having something taken from you. At first, I couldn't understand why - we'd only been together a year, and things were just starting to happen. It took me a long while to see how he felt. He could have been trapped into something he didn't want to spend the rest of his life doing."

Shy, retiring, and more interested in making music than all the work that goes with promoting it, Vince subsequently squirmed out of Yazoo for similar reasons, according to Alison Moyet. The Depeche split was fairly amicable: he continued working with them for some time after announcing his departure, and when the first single recorded without him was a success, the trio were optimistic. Then came their second shock.

The follow up - "The Meaning Of Love", a catchy tune they had expected to do well - was a flop, and their second album was trashed in the press. Previously only a sporadic writer, Martin Gore was finding his new role a strain, and although "A Broken Frame" sold respectably to the loyal, Depeche Mode's credibility had, it seemed, disappeared along with the unkempt Clarke.

The group quickly dismiss any suggestion that the militant socialism of the next LP, "Construction Time Again", was a deliberate attempt to grow up.

"The first album was very young and twee, and ever since then people have been saying we were trying to grow up," sighs Gore. "Even by the second album, we were sick of the phrase. It's nothing you attempt to do - it just happens."

They credit their new awareness instead to a tour of the East that taught them there were worse places to live than even Basildon. But this in itself is not enough - The Police slummed it in India with no noticeable changes, so why did a short stay in Thailand affect the Depeche boys so?

"I think it's the way we've all been brought up," explains Gahan. "I had a bad juvenile background, I got into trouble with the police and mixed with a lot of people who got into trouble - all petty things, silly little things you do all the time. Then at school, I decided I didn't like the way I was treated, so I hardly turned up at all in the last year. From the age of about ten, I can remember things quite vividly that just didn't seem right, and I think we've all had that sort of general working-class upbringing.

"Then when you see things that are poorer than you've ever seen, when we saw people begging and little kids coming up to us with disgusting, dirty clothes hanging off them, showing themselves or holding their hands out for food... When you experience that, you begin to understand what a lucky position all of us here are in. We were in this really expensive hotel full of businessmen, but as soon as you went outside the gates, it was a totally different world.