[NME, 5th October 1985. Words: Danny Kelly. Pictures: Steve Pyke.]
A journalist with an obvious appreciation for and knowledge of Depeche Mode questions them on the possibility of producing more extreme, less precise music. While at times he grinds his axe a bit too hard, he makes his points thoroughly, and the whole article pre-empts Dave's push for a looser, more organic feel a whole seven years later.
“ It’s just this, Mart: yes, DM have made some spanking good records, and yes, DM have kept us all on our toes by incorporating, using, then moving on, but it’s all happened at such a sedate, civilised pace. Depeche Mode never do anything extreme, disturbing or dirty. "
Click to expand... 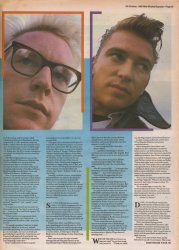 Will Depeche Mode – chart-thrashing chaps though they are – ever find the energy to progress into a more adventurous avenue? This is Danny Kelly’s gripe, which he puts first to that nice young man in the leather skirt, then to the rest of the group. Photography (12” mix) by Steve Pike.

Let’s be fair; Kensington is not Warsaw.

And I mention that because it says something about this odd thing we call Depeche Mode. They are big in Eastern Europe, doing well in America, and gi-bleeding-normous-thank-you in West Germany. Meanwhile, in Britain they remain “that bunch of posey Essex types you sometimes see on the telly, y’know, the ones with the cute singer and the bloke in the leather skirt; y’know, they used to be in Yazoo and then they started banging dustbin lids and frying pans together…” [1]

Only it’s not that simple. Next month Depeche Mode issue a compilation that contains 13 of their 15 singles to date. All went Top 20. That’s 15 more hits than Cabaret Voltaire, a dozen more than Heaven 17 and a good handful more than the Human League. Chartwise at least, Depeche Mode are the runaway and lasting successes of the synthclass of 1980. And there’s more; over the space of those 45s, DM have maintained critical interest (if not always approval); have constantly refizzed their pop cocktails with dashes of funk, squirts of dub and lemony slices of metal bashing; and have defied those who, unable to see past Vince Clarke’s talent for Stylophone dinkipop and Mode’s choirboyish TV turnouts, just knew they’d be a flash (bunch) in the pan, a couple of charters and then See You.

All these things – added to a healthy addiction to their 12-inch monster mixes (the foot-wide version of the puerile “People Are People” seven-inch, for instance, is a miraculous transformation, the nearest anyone’s yet come to the perfect arc-welding of pop and industry, funk and factory) send me in Depeche Mode’s direction with a more than sneaking regard for them. But because all their little victories, their refinements and tricky subversions of the norm, have happened over so long a time and at such an evolutionary, definitely careful, pace, I also carry an armful of complaints, grumbles and reservations as I approach them.

Or rather, at first, quarter of them! As Depeche Mode have metamorphosed in the unrelenting glare of pop’s spotlight, from little boys to, well, bigger boys, they’ve (naturally) changed, and Martin Gore’s the one who’s altered most startlingly.

When Clarke’s departure thrust the yoke of DM songsmith onto him, Gore was a shy Basildon boy, engaged to the girl next door. Passing him in the street, you wouldn’t have spared him a second glance. And now, three years on, he’s…

Well, he’s sat in front of me in a pub where a chess match (complete with chess rowdies!) is in progress. You’d now afford him that second look, and probably a few more besides. His tiny, girlish fame is armoured from head to foot in creaking black leather. His platinum quiff has been squeezed, like toothpaste, through a hole in his otherwise shaven head. His makeup is ghostly white and thick, his nail varnish iron-cross black and chipped.

Martin, you see, caddishly ditched the G-N-D, took up with a fraulein called Chrstine and deserted Basildon for the last stop on rock’n’roll’s main line, siege city Berlin, a place which for the purposes of this story is entirely populated by Turkish wage slaves and the totally wired, next-stop-hell (or, failing that, the ICA) artistic community so lovingly chronicled by our very own Don and Biba.

The effect of this relocation on our hero was pure Road To Damascus. Martin Gore (who’s probably more pleased with his surname now than ever before) has attempted to take on the heart-of-darkness trappings and attitudes of the likes of Messrs Bargeld (indigenous Berliner), Cave and Thirlwell (honorary Wallflowers).

Now, it’s sometimes hard enough to take this latter trio entirely seriously in their chosen roles as decadent, death-defying delvers into the unlit recesses of the psychic junkyard, so what price a cherubic Essex lad with a voice that should, if there was any justice, have seen him a member of his local council’s Parks, Gardens and Floral Verges Department? No, try as he might, Martin Gore comes across as a viralpop YOP, a Reasonable Seed, a Chad Valley Nick Cave.

But he does try. From the mind that once rhymed “should it be” with “awfully”, catch some of this:

“I’m quite a pessimistic person and I see life as quite boring. So I kind of see our stuff as… Love And Sex And Drink Against The Boredom Of Life.

“When I write love songs people think they’re really soppy, but I see love as… a consolation for the boredom of life. And drink and sex…

“Personally speaking I think we’re quite decadent. When we’re on tour, which is generally very boring, we, or some of us, tend to go out every night, have a lot to drink and generally have a good time. Consolation, see? I know it’s all expected of rock bands, but going out is enjoyable, drinking is enjoyable and collapsing is enjoyable.”

There’s miles more of this loving and humping and boozing stuff but you get the general drift.

A bargain of sorts has been struck here. In return for the Neubaten / Atatac (a German label much admired by MG) flourishes that add a new dimension, an undreamt-of depth, to the 12-inches of “People” (Different Mix), “Master And Servant” (Slavery Whip Mix, natch) and “Shake The Disease” (Something To Do Mix) [2], we have to tolerate the sad spectacle of the only son of Mrs Gore of Basildon, Essex, boozing and shagging his frail body to a soggy string. Sort of. But, as it doesn’t seem to be doing him too much harm – lots of people wear leather skirts and dresses, don’t they? – it doesn’t strike as too bad a deal.

Actually, cowhide couture, miserabilism and consolatory sex aside for the moment, Berlin has been important and good for Martin Gore, leaving him more outgoing, confident and, having absorbed a lot of music he wouldn’t necessarily have heard on Radio Basildon, a better writer. So Depeche Mode, though it’s hard to believe that the band’s internal cohesion has been helped by Martin’s lifestyle transformation, have benefited too.

So, while Martin downs another whiskey in his bid to compensate for the boredom of a life that sees him jetting around the world to make pop music (his father drives lorries in Basildon), it seems, what with all this confidence in the air and an ego-massaging LP on the blocks, a good time to get my gripe about Depeche Mode off my chest.

It’s just this, Mart: yes, DM have made some spanking good records, and yes, DM have kept us all on our toes by incorporating, using, then moving on, but it’s all happened at such a sedate, civilised pace. Depeche Mode never do anything extreme, disturbing or dirty.

Don’t you ever get the urge to smash through this self-imposed restraint to set yourself and Depeche Mode dizzyingly free? Don’t you ever feel like casting off all the consideration, all the ticka-ticka Timex precision, and pummelling this music into extremis, to really let rip?

“I want to represent life’s boredom…”

“… and if you take things to absurd extremes you’re not really reflecting life. Real life is not extreme, so we’re not, and nor is our music.”

[1] - We know he's satirising the attitude, but to correct the bit about Yazoo, none of the band members used to be in Yazoo. Vince Clarke left Depeche Mode in 1981 and formed Yazoo the following year.
[2] - He's got the title round his neck here. The mixes of Shake The Disease were called (disappointingly given the titles we've just seen) the Remixed Extended Version and Edit The Shake. The confusion probably came from the fact that the release also featured a remix of the track Something To Do (the Metal Mix).
Click to expand...