Martin Gore Martin Gore: Me And My Leather (Unknown magazine, 1985)

Staff member
Martin Gore: Me And My Leather
[Unknown magazine, 1985]

Martin talks about his highly individual taste in clothing, and nothing else. A fascinating and unusual piece, all the better for the fact that no-one else is chipping in and trying to analyse his comments.
" The history of leather is significant. It has a strong, magnetic aura. The Nazis wore it because it was attractive and powerful, it went with the fascist image and the magnificent buildings. It was supposed to impress people. "
Click to expand... 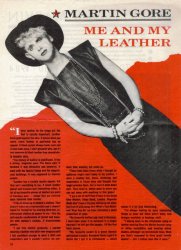 “I wear leather for the image but the feel is equally important. Leather feels good against the skin. It moves when you move. Black leather in particular has an appeal. A black jacket always looks cool and it also looks sexy. I can’t pinpoint why, but if I see someone in black leather they immediately become sexy.

“The history of leather is significant. It has a strong, magnetic aura. The Nazis wore it because it was attractive and powerful, it went with the fascist image and the magnificent buildings. It was supposed to impress people.

“Leather has a certain macho appeal, but that isn’t everything to me. A black leather jacket and trousers isn’t everything either. A lot of my favourite pieces of leather are parts of bondage gear… straps that are actually more feminine than macho.

“I like to dress up in women’s clothes. That doesn’t make me a transvestite and it doesn’t mean I’m “turned on” by wearing them but, er, effeminate clothes do appeal to me. I like the anti-macho combination of jacket and trousers with women’s clothes. It disorientates people.

“I got into leather gradually. I started wearing a leather mini skirt over trousers until I felt confident enough to wear a skirt and suspenders and it wouldn’t bother me any more than wearing full make-up.

“There have been times when I thought an audience might react badly to my clothes. I wore a cowboy hat, dress, stockings and suspenders in Texas once and thought that might provoke them, but in fact it went down well. They liked it, which goes to prove you can get away with anything in this game!

“I get a lot of stuff from Frisco in the Great Gear Market, King’s Road, London. Depeche Mode don’t have a big gay following but since the first LP with songs like “What’s Your Name” and “Boys Say Go” we have attracted a small proportion of gays.

“My favourite leather cap I lost in Germany. I must have given it to someone in a stupor because I’ve still got the badges. I’d like that back please…

“My favourite jacket is a green German policeman’s jacket. Everyone thinks I got it in Berlin but I got it in Portsmouth - which makes it a lot less interesting.

“I’m always looking for more interesting things to wear but there aren’t many new designs available in bondage stuff.

“I belong more to the effeminate camp of leather wearing than the Marlon Brando camp of riding motorbikes and wearing mirror shades, although I do love Brando films. Mind you that’s supposed to have great female appeal – but I reckon men like it more.”
You must log in or register to reply here.
Share:
Facebook Twitter Reddit Pinterest Tumblr WhatsApp Email Link
Top