Depeche Mode - The 04th Strike | dmremix.pro
Menu
Log in
Register
You are using an out of date browser. It may not display this or other websites correctly.
You should upgrade or use an alternative browser. 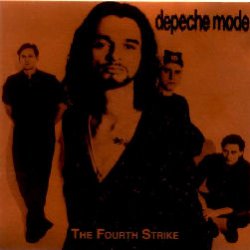 Read more about this resource...

[Very good sound quality, except last 3 tracks which are OK]

The sound quality is definitely better the URT 3 (my only other bootleg).

Random notes:
I'm quite happy with this purchase. The last three tracks have worse sound quality than the rest of the disc, but I think they are still better than, for example, the two Martin Gore outtakes on Ultra Rare Trax 3. So, you might give them a different rating.

Enjoy The Silence (Promo Mix)
An edit; not bad, but nothing that interesting either.

A Question Of Lust (Margouleff Remix)
Very good mix; not overdone, maybe somewhat _underdone_, but still quite good (although a little short).

Just Can't Get Enough (On USound Remix)
Lots of samples and a great deal of mixing going on here, including samples of a live version. I think it's pretty good. (slightly worse sound quality)

Master And Servant (Hammerhead Mix)
Good except for the "POWER" sample (maybe from a radio station announcer?) which is used just _way_ too much. Starts off with 'Treat me like a dog' intro (shorter) from the Slavery Whip Mix.

Never Let Me Down Again (Groovy Mix)
First 40 seconds is a recording of a scan through a radio dial. Then it starts off with the regular music except that right before the first drum beat, it repeats the intro music again. It does this a number of times before it actually starts (cool effect). The rest is pretty much the same as the original version, until the end, when the Aggro Mix picks up and finishes a couple of minutes later. Groovy!

It's Called A Heart (Prehistoric Mix)
Sounds like something Razormaid might do. Its good, somewhat complex, but it still isn't great (perhaps because this isn't really my favorite song to begin with).

World In My Eyes (Ultimix)
Lots of samples (including "enjoy the silence"). I think a little too much mixing is being attempted. Ok, but not my favorite.

Rush (Dub Mix)
A percussion sequence repeated during the whole song. Short excerpts of music from the original version is interspersed throughout--the excerpt is played then abruptly cut off. I think the only lyrics used are: "Open your sensitive mouth, hold out your delicate hand" and "When I come up, when I rush, I rush for you."

I Want You Now (No. 5 Mix)
A drum machine sequence repeated throughout the song. A very slightly edited version of the song is played about one-and-a-half times, then the last two full minutes of the song consist of only the drum sequence. A bad excuse for a remix.

Here Is The House (Sung by Martin)
Poor recording, but since it is probably a demo or something similar, I guess it is excusable. "Body and soul come together, as we come closer together" is replaced with "Colors and shapes merge together, as we come closer together." A few other subtle differences, other than it being very bare-bones and highly unproduced.

Violence (unreleased track)
I Feel No Guilt (unreleased track)
Don't have any idea what album these were left off of. They're ok I guess, but I can also see why they were not released (although they're better than, say, "Work Hard" I think IFNG is the better of the two.

First, the M & S and NLMDA remixes are on the tail end of the PIMP megamix. I thought that the Rush mix was the same as that on the SOFAD (remixes) disc, but it is in fact slightly different; the regular remixes are better.

I Want You now is, as mentioned, an edit with drumbeats, however, I believe that it is the "Funky Mix" by the Bogus Brothers - can anyone back me up?

Here is the House - 'Colors and Shapes merge together, as we come closer together' - a mix that defies explanation, it is cool, sounds like it's played with ancient keyboards and Martin singing leads *and* backups at the same time - this song and the next two make the disc worth the money!!!

Violence - 'Violence, Infatuation' - a very catchy tune, reminds me of a more upbeat Shake the Disease - very cool, sounds like it was made before Violator, perhaps even earlier, also has samples from Recoil (song '#1')

I Feel No Guilt - sounds like it was made around the same time as Violence, and is pretty good.

The sound quality for these last three songs is *OK*. IMHO, Here is the House is the coolest 'new' track, with Violence a close 2nd.

You must be registered for see links
Tracks 10-12 are demorecordings.

I Want You now is, as mentioned, an edit with drumbeats, however, I believe that it is the "Funky Mix" by the Bogus Brothers - can anyone back me up?
Click to expand...