Depeche Mode The Last Of The Futurists (Record Mirror, 1985)

Band interview at the time of the release of Shake The Disease. The lyrics to Flexible spark off a discussion on the difficulties a successful band has in staying true to its roots - and another on Martin's, er, "flexible" dress sense. The article implicitly lauds them for keeping their music values, but it runs the risk of putting them nicely back in the New Romantic pigeonhole when other writers were finally taking a second look.
" “I think they really appreciate it if the way you work is on the same level. Obviously, we’re a lot wealthier than we were five years ago, but it’s all down to our attitude towards money. You’ve got to be careful about greed. We’re not surrounded by people all the time, there’s no-one telling us we’re the greatest thing.” "
Click to expand... 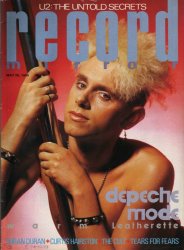 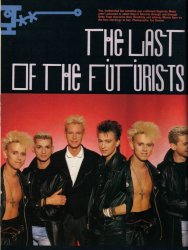 There are fifteen thousand futurists in Orange County, California. Not many people know that, but Depeche Mode discovered them single-handed. Yeah, you remember futurists, running concurrent with frilly new romantics, all silly haircuts, one finger synths and even sillier dancesteps. All of five years ago it started, and America’s only just caught up. The Deps have come along a bit since then, but Orange County just lurves them.

Fletch (aka Andy, the one who still gets mercilessly ribbed): “We missed the boat in America a couple of years ago, we didn’t bother going – now there seems to be hardly any British bands there and we’ve gone and done a hugely successful tour.”

Dave Gahan (goatee-less, now blond bombshell): “And we’re the most talked about… We got nothing but good reviews and we found in Dallas, Houston Chicago, even in the sticks, that there were futurists everywhere.”

Yep, hip hop’s still huge Stateside and they’ve only just got used to hearing the twiddle of knobs. Hence the Basildon invasion and takeover. Dave: “I think if FM stations started playing more British music like ours, there’d be a big audience for it.”

Back home, “Shake The Disease” shakes the charts and sees Martin Gore take his poignantly observant, melodic lovesong style to further maturity. “It’s a good song,” says Dave, “which is something that’s been lacking in the charts lately – they’ve been in a real state. There’s a lot of American music there and nothing to really grab hold of, no new thing. We’re still out and out futurists, though!”

“Mart’s gone all lovey dovey now. We know it’s always the actual song quality that matters – it’s melody, and we’re more mellow now. Some of the things that have been successful recently have just been rhythm tracks, basically what we did on the new B-Side as a bit of fun in the studio.”

Said B-Side is a rampantly danceable ditty called “Flexible”, all about ideals popping out the window when success is sniffed. Does this happen? Dave: “Yeah – futurist bands start using bass guitars and throwing their synths out. You have to compromise, though, we’ve had to quite a lot.”

Andy: “We’re basically working class kids, and when you’re shoved into stardom, when you’ve suddenly got a lot of money from nothing, it’s easy to lose perspective.”

Dave: “It’s the power, too – bands get too wrapped up in their own egos. It’s a shame when a working class band come up through the clubs preaching about their roots, and then they go and forget about all that.”

Andy: “I think if you want to stay successful it’s important to have something the kids can identify with; some bands might say kids love to watch us jetset around, but I think that’s rubbish really.”

Dave: “I think they really appreciate it if the way you work is on the same level. Obviously, we’re a lot wealthier than we were five years ago, but it’s all down to our attitude towards money. You’ve got to be careful about greed. We’re not surrounded by people all the time, there’s no-one telling us we’re the greatest thing.”

Martin arrives, freshly maquillaged, sporting his usual ensemble of leather skirt (no trews this time), and fetching black and red lace camisole, the like of which I wouldn’t mind for myself. This is the man responsible for the probing lyrics of “Flexible”.

“It’s a kind of a joke,” reveals Mart. “Cos I’m sure for instance if my mum looked at me now, she’d think “what has it done to you?” And the actual style of the music was meant to be quite jokey, cos if you imagine after the initial new romantic / futurist thing, a lot of bands thought we can’t make it playing this kind of music, so they all went into salsa, all those trends, trying to hit on something that might be successful. This was trying to combine all these jokey styles.”

Depeche Mode have braved trends for 4˝ years now. I remember them then, fresh-faced naďve young lads posing nervously for photos in the Rough Trade stockroom for their first ever interview. Mute was the operative word. “Eeeech!” shrieks Dave at the memory. Do they look back and think “that couldn’t be us”? Dave: “Yeah, we do it all the time. We totally understand why people hated the way we looked, took the mickey, cos we do it now.”

Andy: “We were very young then, we were just off the street and looked it. They boy-next door thing came when they told us to smile – we just smiled, we were new, we thought you had to. When you’re five, that’s what you’re taught to do.”

Dave: “It’s all part of growing up within ourselves and within the band. We’ve progressed really well, the music’s matured with us cos we’ve had room to breathe rather than just being pushed into a certain style. The only thing that hasn’t changed really is that we’re an out-and-out electronic band, and we’re not ashamed of it – the only surviving futurist band! But there’s a big market for futurism, and no-one realises it – it’s the biggest thing in Europe.”

Sweet little boys always grow up, especially ones that look like choirboys. Now, Martin Gore wouldn’t look out of place in that cheeky fetish club we won’t mention. “I hardly have to buy any clothes these days,” he says innocently. “When the fans realise what sort of style you’re after, they throw things onstage – I’ve got tons of necklaces.” Shame, but they don’t catapult leather skirts stagewards.

“I was working it out the other day,” he continues, “it’s quite good, when you start off in one direction, fans throw things on, then you’re taking their style. It’s better than having a stylist.”

So come on Mart, what does your mother say about what you wear?

“She accepts it now, I’m quite surprised really. When I went home this time I was wearing stockings and things. I went to me mum and said, “what do you do with stockings mum, do you just put them in the washing machine?” And she went “just put them in with the blacks, dear”.” He laughs raucously. [1]

Yet they all have a penchant for leather. Have they had any adverse reactions yet?

Alan (Wilder, the cute, gentlemanly one): “We get more stick for that in England than anywhere else. We didn’t come across any aggressive rednecks in America. You get some businessmen in America shouting “faggots”, but very few compared to the carloads you get here shouting “pooftah”.”

Andy: “I’m one of the most patriotic people going, and even I’ve changed my mind a bit about British broadmindedness.”

Are any Dep fans taking a lead from their newly acquired sartorial leatherness?

Isn’t it strange, all these Pringle boys coming to see you leather ‘n’ chains merchants?

Alan: “You can get away with so much more in this lark, people accept it.”

Martin: “Andy was saying to me the other day, you wouldn’t dress like that if you were still working for the bank. It’s not even a question of getting away with it so much now, it’s more a question of broadening people’s minds. After a while they accept you as being totally normal dressing like that, so they must be subtly changing their attitudes towards dress, cos most dress is very boring. I really notice it when I come back to England after being away for a while. I walk around Basildon town centre and there’s no style at all.”

Five years is a long time in rock ‘n’ roll and Depeche Mode have not only survived, but improved immeasurably. And they haven’t really changed – they’re real general guys who’ll buy their round in the pub with the rest of them. Still, they’re not quite like the rest of the pop whirl. Alan flashes a snapshot of Martin in Japan dressed in a Japanese schoolgirl’s uniform; Andy says he never listens to music and Dave just wants to get home to do a bit of gardening. As in the words of the song: “I ask myself / should it be a sin [sic] / to be flexible / when the boat comes in?” Adaptable futurists survive; so say all of us.