Short interview exploring the question "Are Depeche Mode normal?". While the band talk about areas in which they could be considered eccentric or decadent without any great revelations, their uneasiness about making videos is somehow enough to convince the interviewer they are not normal. A very lightweight piece, but about the only one where the band discuss this subject at any length.
“ “Lots of normal people do get involved, then they become a bit more abnormal when they become successful. A lot of people do get a bit carried away with it, don’t they?” "
Click to expand... 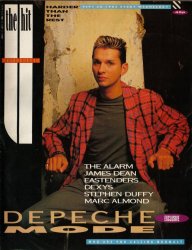 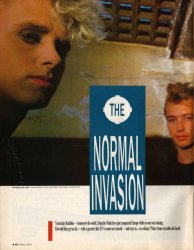 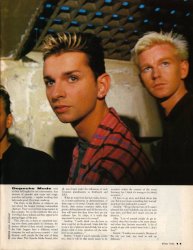 Depeche Mode were in their full regalia for our conversation. Any amount of pancake spot cover and rouge, powders and paints – regular working class lads made good. Or at least, made up.

The Deps, or the Modes, or whatever, are just about the longest running independent chart act. They’ve never been mega-massive in this country, but on the continent they are a Very Big Cheese Indeed, and they appear to be getting bigger all the time.

This, they say, is down to consistent touring over there, particularly in Germany, the tireless efforts of their record companies – the little beggars have a different record company for each and every country! – and because, well, people like that sort of thing over there. The Depeche Mode Sound, after all, was forged under the influences of such Teutonic grandmasters as Kraftwerk and DAF.

What we want from the lads today, however, is some explanation, or demonstration, of their urge to be normal. Despite their leather frocks, their serious cosmetics habit, their gravity defying hairstyles and all the rest of it, they will insist that deep down they are just ordinary Joes. So, chaps, is it really that important for pop stars to be normal?

Andrew: “I really think you do have to keep your feet on the ground. Some kids like to see a lot of glamour and all that, but we’ve always tried to keep ourselves on the same level as our audience…”

Martin: “I think if you’re naturally eccentric, then it will be that much easier to be eccentric within the context of the music business, but I think it’s wrong to be falsely eccentric…”

I’ll have to go away and think about that one. But is pop music something that ‘normal’ people go into looking for a career?

Andrew: “We got shoved into it! It wasn’t planned this way! Suddenly one day we were pop stars, and there isn’t much you can do about it…”

Martin: “It makes you eccentric. Because of the life you lead, you tend to end up different.”

How do you feel about people using the word ‘decadent’ around you? Especially you, Martin, with all that leather stuff you wear. It’s saying something about you which presumably you don’t agree with, not being a real leather fetishist…

Martin: “Well, I’m not into… pain, or any of that kind of thing. Decadence covers a lot of areas! Some of us go out drinking when we’re on tour, and I know that’s sort of expected of us because we’re a band, but unfortunately it’s a way of enjoying yourself…”

David: “You do actually like decadence though, don’t you?”

As a surface style, or as a way of life?

Martin: “Sometimes… when you’re doing something, even just walking down the street with your girlfriend, you get this feeling of being too normal. It’s not a very nice feeling…”

David: “I can assure you you’re not normal, Martin…!”

Alan: “It’s supposed to be an exciting and varied life, but it can get quite routine, if you sink into the album-tour-album syndrome. So it’s good to find ways of altering the routine. For instance we went and played a couple of gigs in Hungary and Poland recently.”

And what were your impressions of those countries?

Andrew: “It’s not fair to judge countries on what we saw, which was just the capital cities, but Budapest was pretty much like any other capital city, with the same sort of people, it could have been anywhere. But Poland was completely different. For me, anyway, it was a big culture shock, especially you know… females, what they look like and things. For one thing, they didn’t wear make-up, and the clothes that they wore were very dated. Things like your mother wore about 20 years ago, all the flowery dresses and things…”

I thought that was exactly what British females were wearing all summer, but we’ll let that pass… these lads seem normal enough to me. For pop stars, I mean. Until, that is, I mention videos…

David: “I was on a phone-in programme on the radio one time, and a girl rang in to ask me why Depeche Mode always made such crappy videos! I was stunned! I didn’t answer it very well at the time, but I think it’s because we try to put the emphasis on the singles. We never really think about the video at all…”

Alan: “That sounds like we aren’t happy with our videos, which isn’t actually true. We’ve liked most of our videos! In the early days there were a few dodgy ones that even we didn’t like, but we’ve liked all the last six or seven… the fact that some TV producer says they’re unshowable doesn’t necessarily mean that they’re no good…”

David: “You know, I think the record buying public places too much emphasis on videos – they’re too easily excited by videos rather than listening to the music. If they see a good film, and the pop stars in it look, you know, really nice, they’ll go out and buy the record!”

Alan: “There’s a lot of rules you have to comply with if you’re going to get your video shown. You have to have a certain amount of the singer lip-synching, for example, and if it’s on good quality film and very glossy it’s more likely to get shown.”

Martin: “Yeah, it’s a very funny situation because we only make videos because we want to sell records, and yet we don’t make the sort of videos that will sell the maximum number of records. We came to a kind of compromise between making the kind of videos that people want us to make, and… not making videos at all!”

It does sound rather strange, don’t you think, to hear pop stars saying they wouldn’t make videos unless they had to?

David: “It’s not all that strange for us, because we aren’t actors. We’re in the music business, and we make music, and we aren’t interested in making films. They’re very boring things to do, you spend most of the time sitting around doing nothing. Of course, it’s great for the directors, cos that’s what they’re into…”

Alan: “A lot of videos just end up looking like exercises in film technique, with the director just taking the piss out of the band – there’s a trend for performance videos at the moment, but we don’t act in them any more. We tried doing story videos, we’ve done some like that and we’ve discovered we just can’t do it…”

I really must get to see some of those videos. They sound terrible!

But can we move to a vote? Are Depeche Mode normal? Pop stars who don’t like doing videos! Pop stars who expect their videos to reflect their personal reality! Pop stars who think drinking is decadent, but do it anyway! Polite, talkative and sweet-natured they are, but normal???