Depeche Mode What We Did On Our Holidays (Smash Hits, 1985) | DMremix
Menu
Log in
Register

Depeche Mode What We Did On Our Holidays (Smash Hits, 1985)

A collection of photographs taken by Depeche Mode while touring, many of them whimsical, and all of them showing the band off duty and just doing average things. Non-fans will find it pretty pointless, those already devoted will find it endearing.
Click to expand... 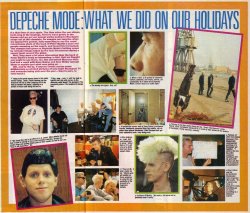 It’s that time of year again. The time when the sun shines, birds sing in the treetops, flowers wave gently in the breeze and we get our annual works-outing-to-Blackpool snaps out of the chemists. So imagine our surprise when we opened the packet, fully expecting to see the usual out-of-focus shots of the back of Peter Martin’s head and people snoozing on the coach, and found this lot instead. The chemist had given us Depeche Mode’s holiday snaps by mistake! Snaps taken by the lads themselves during a recent jaunt around the globe.

Well, they were a lot more interesting than the back of Peter’s head; so interesting, in fact, that we thought you ought to see them, too. But not before Maureen Rice had had a word with Dave Gahan and Alan Wilder and got them to explain just what was going on…