Depeche Mode - Classic Beats 01 Classic Remixes | dmremix.pro
Menu
Log in
Register
You are using an out of date browser. It may not display this or other websites correctly.
You should upgrade or use an alternative browser. 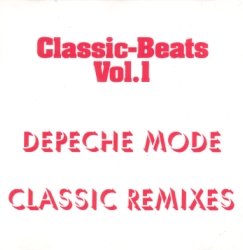 Read more about this resource...

Along with DJ's, one of the first bootleg cd's produced. Not the best bootleg around, however. QUALITY = 7

Breathing In Fumes 5:28
This is basically the original except a bit shorter.

New Dress 6:45
This is an extended version of New Dress. There is no fancy remixing, it is merely altered by repeating several parts.

Master..Set Me Free 9:11
This track starts off as Master and Servant, goes into the Slavery Whip
Mix and then leaps into Set Me Free (Remotivate Me). It is altered only a bit by cutting and pasting.

Strangelove (Fresh Mix) 7:54
This track features the Pain Mix and a sample of an artist saying SUPER DJ. Again only a bit of cutting and pasting.

Just Can't Get Enough (Base Mix) 7:19
This track is a mixture of the original and the live version as heard on the B-side of Love In Itself. The beat is alter a bit and the track is edited with a phase shifting device which makes it sound as if you're listening to from far off and the wind is taking away the sound periodically.

Master And Servant (Power Mix) 8:11
This is the Slavery Whip Mix. It is edited a lot. There is a sample of a
voice saying POWER every once in a while and the rest is cut up,
repeating bit's and echoing parts repeatedly.

A Question Of Lust 3:45
This comes closest to the remix on the limited edition cassette single.
No special effects.

It's Time For A New Life Megamix 11:41
This track has parts of the following songs, all strung together:
Everything counts / People are People / Master and Servant /Just Can't Get Enough / See You / A Question Of Time / New Life

The Broadway Medley 13:08
This track has parts of the following songs, all strung together:
Strangelove (Simenon/Saunders remix) / People are People /Master and Servant / Behind The Wheel (remix) / Route 66 (Casualty Mix) /Just Can't Get Enough (Schizo Mix) / Set Me Free (Remotivate Me)

Some vinyl noise is evident on most tracks, but not much. Overall sound quality is very good.

Breathing In Fumes (Razormaid)
Sounds very similar to the original.

Strangelove (Fresh Mix)
A good remix with a different puchy beat. And of course that "Super DJ"sample from Cameo's "Word Up". A very small amount of vinyl noise.

Just Can't Get Enough (Base Mix)
A really good mix of the regular version and a live version, with crowdnoise, Dave saying "This is a 12-inch, so sing along", and a thumping beat. The vocals are a bit too far back in the mix sometimes, but this is still a great mix despite a tiny bit of vinyl noise.

Master And Servant (Power Mix)
Good cut and paste mix, with effects and repeated and echoed samples from the original mixes. Features a voice saying "Power" all over the beginning of the track, sounding like something from an American radio station. Some vinyl noise.

A Question Of Lust
A few nice effects in the background, otherwise similar to the album version.
Sounds very radio-friendly, a bit poppier and happier than the original.
A good mix.

It's Time For A New Life Megamix
A good mix, with bits of songs showing up in other songs--more mixed- up than some megamixes. Good sound, with a tiny amount of vinyl noise.